Volunteering as a Teacher in a Rural Chinese Elementary School

Volunteering as a Teacher in a Rural Chinese Elementary School 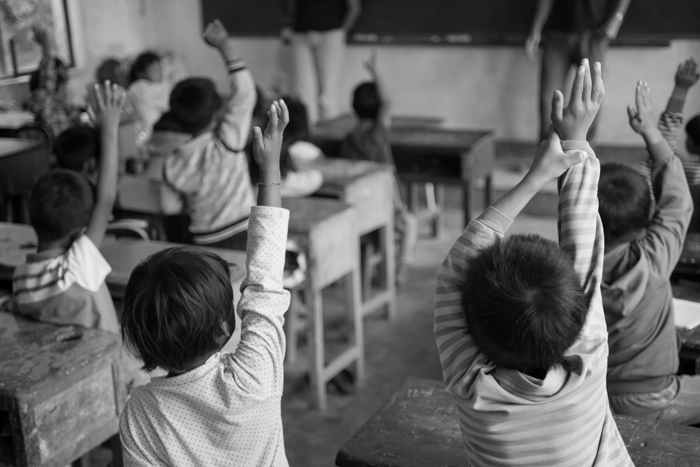 At the end of September a group of seven students from Princeton University’s China Bridge Year Program arrived in the remote village of Bangdong, perched on the slopes of the Upper Mekong River (澜沧江) valley in Lincang Prefecture in China’s southwestern Yunnan province.

Participants in the China Bridge Year Program are Princeton undergraduates who have deferred their first year of courses at the Princeton campus in order to experience China firsthand and get intensive Mandarin exposure by living with local families in Yunnan’s capital city, Kunming. The students also take part in additional shorter home-stays and service projects in rural areas of Yunnan.

Dali Bar Co-Founder Colin Flahive and Village Progress organized the students’ homestay and service project in Bangdong through contacts made from earlier work with village schools and health officials in the area. 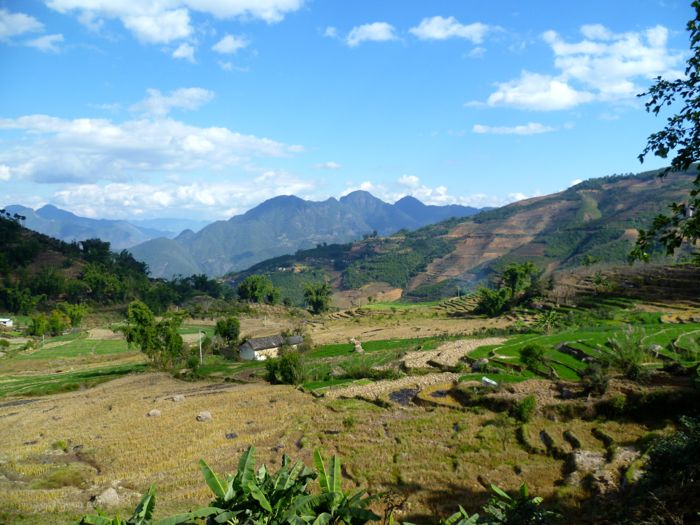 During their time in Bangdong, pairs of the Princeton students lived with village families. While many of hallmarks of modernization such as electricity and mobile phone coverage have come to Bangdong in recent years, it is nevertheless a small farming community very far removed from the typical American town. While staying with their host families, the students experienced the rhythms of Chinese village life, including the daily ritual of families cooking meals on wood-fired stoves from food they had grown themselves. The students also pitched in and helped the families in daily tasks such as picking the tea that is a crucial crop for the local economy. 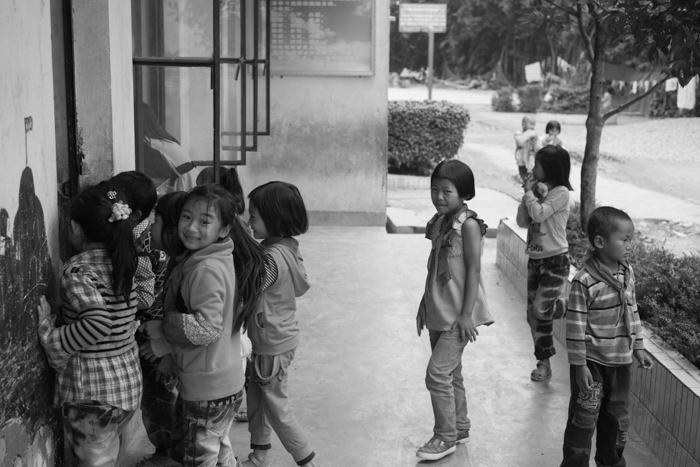 Their service project consisted of teaching in the local elementary school for five days. Despite nationwide compulsory English education from the third grade, students in rural China lag behind their urban counterparts due to factors including insufficient financial resources and a lack of qualified teachers. Many rural villagers in Yunnan have never even seen a foreigner in person, much less had the opportunity to converse with a native English speaker. The service project gave elementary students in Bangdong a perspective-changing experience that many will carry with them for the rest of their lives.

Princeton students Henry Stolz and Luis Legro took part in the service project. Stolz shared his photos with us and Legro shared his account of teaching in Bangdong and its effect upon his own worldview:

As part of our group’s fall service project, we volunteered as teachers at a local elementary school in Bangdong Village. Each day for the five days leading up to China’s National Day holiday, we climbed the tall hill that stood between our home-stays and the school. As we arrived the first day with beads of sweat dripping down our faces and our humid shirts plastered to our bodies, I wondered what the students were thinking of us and what effect this rather memorable first impression would have when they became our students later in the day. At first, we could only stand in place as dozens of little eyes pointed their gaze at us and dozens of little bodies prevented us from fleeing in embarrassment. But then, as the pre-class song “Good Baby” (好娃娃) began to fade from the school’s loudspeakers and bells signaled the beginning of the day’s classes, the kids ran to their classrooms swiftly and promptly.

Now the true test of our endurance began. Would they listen to us knowing we couldn’t say much in Mandarin? How would we even be able to teach given this language gap? Though I can’t speak for others in my group, I was pleasantly surprised by my own experience.

I was assigned two classes: one fifth grade class and one sixth grade class, both of which had about forty students. Though both were great classes in their own respect, I have chosen to relate my experience with the fifth grade class owing to their unbridled enthusiasm for learning English.

When my partner and I walked into the class the first time, it was as if a spell of silence had immediately been cast. Even a small irregularity in breathing would have been heard around the room. Apprehensively, we set our bags down and made a whispered review to each other of the lesson plan we had devised earlier that morning.

As we positioned ourselves in front of the class, we broke the silence with a nervous but energetic “hello”. Almost on command, the class reciprocated in faultless unison. We then wrote our names on the board and asked them to repeat after us, which they also did automatically. “So far, so good,” I thought to myself. We told them that today we would be learning the ABCs and as we wrote the first three letters on the board, they instinctively yelled out the letters’ names—again in unison. As we got further down the alphabet, though, the unison gradually broke and the yelling dwindled to silence. 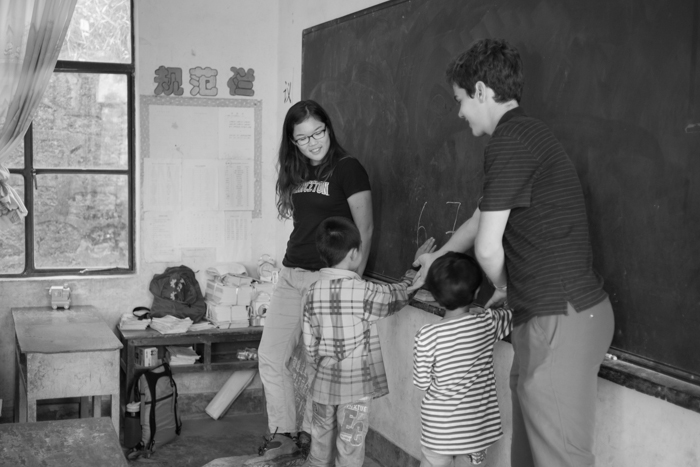 We slowly took our pupils through the alphabet and reinforced it with repetition. By the end, they had pretty much gotten the entire alphabet and so we decided to ask if they knew the “alphabet song”. They didn’t seem to, so my partner and I—seeing our opportunity to shine—began to sing the song. Each time around, more and more of the class joined in until the unison was again established. To further reinforce the learning, we decided to play a game where each child attempted to identify the letter we said as quickly as possible.

The game quickly got their attention and every day we were there, the children waited in anticipation of a different version, first with the ABCs, then body parts, then numbers, then colors, then a hodge-podge of the different lessons. My partner and I were awestricken by how fast the children were able to really learn all the lessons and not simply use rote memorization (a premise that my partner and I confirmed by throwing them occasional curve balls). 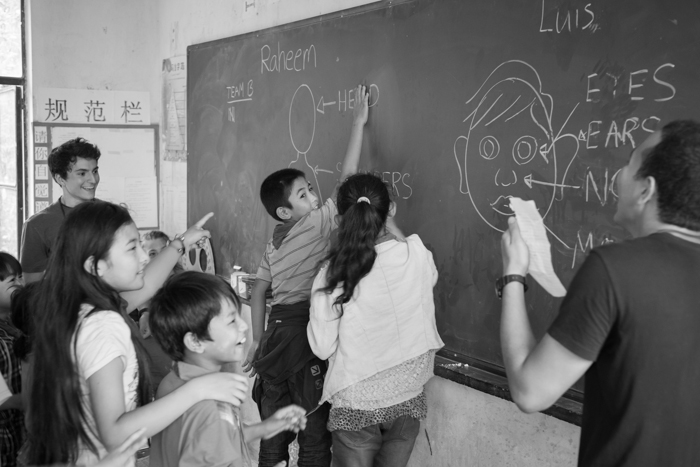 To spice up the body parts lesson and get some blood flowing, we decided to use “Heads, Shoulders, Knees, and Toes” as our class anthem (and I guess as a supplement to the lesson). Every day, as we would speed it up then slow it down and along the way, the class learned supplementary vocabulary like “fast”, “slow” or “whoops”.

On the very last day as we dedicated all our time to reviewing material with a variety of games and other methods that would be both fun and memorable for the students, we prepared ourselves to say goodbye. As the bell rang, our instructor came up to us and asked us if we would like to teach an extra two periods (upon suggestion by the class teacher, who also served as the school principal). We accepted the challenge. And it would certainly be a challenge: not only were we drained of energy, but we had also not come up with lessons for the unexpected additional time given to us. 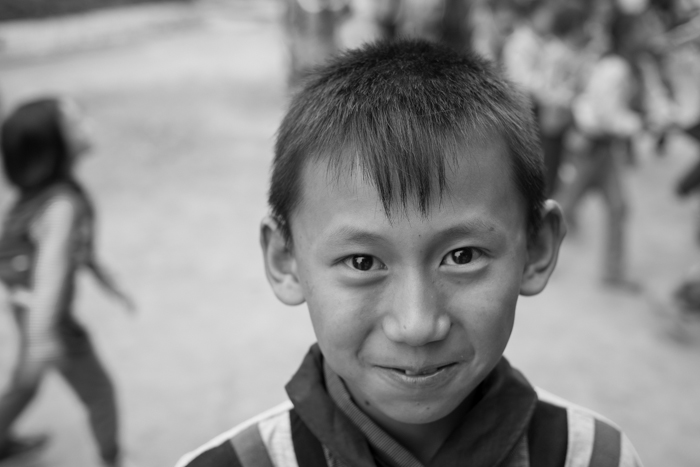 During the break between the classes, we quickly got to work on preparing new lessons and decided to teach common English phrases. When we had finalized the lesson, the kids began to swarm us with requests for English names. Having never named anyone before in our lives, we were slow and pensive, but soon we had named each of the forty kids with the help of our instructor. After a while, we noticed that we had assigned at least two names per student. We eventually found out that for the past couple of minutes, we had actually been naming their family members too! The swarming continued through the breaks, but again as soon as the bell had rung, the children retreated to their seats to await the next lesson.

Perhaps our proudest accomplishment was that by the end of the class, we persuaded a couple of students to come up to the front of the class, become the teachers, and guide their classmates through the exercises. Unfortunately, the day did come to an end and, after we had finished taking pictures and saying our goodbyes, the students guided us back to the tall hill and to the beginning of our final descent. 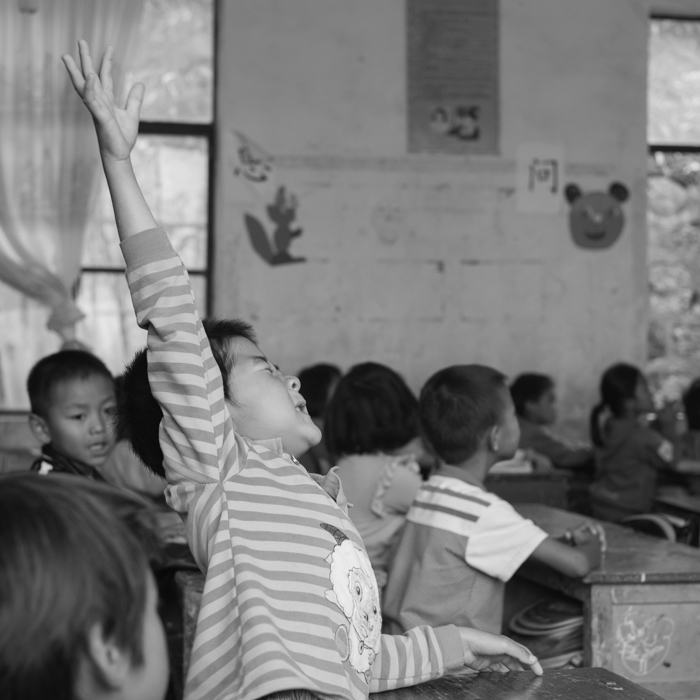 Thinking about it now, I still ask myself the same questions I asked myself at the outset of the service project. My apprehension, however, has been replaced with feelings of amazement. Really, how did it work? It was truly an eye-opening experience that showed me both how valuable oral communication is and how limited. How is it that I can go across the world and express myself the same way through a set of gestures? A smile is a welcoming wherever you go; it’s an external sign of an inward sense of satisfaction. It’s experiences such as this one that really reminds us of our most important commonality: being human—or rather experiencing humanity ,whether through laughter, fear, or a need to treasure a memory, an experience such as this one.