Contributor Mike Dobie is a China-based rock climbing athlete supported by Black Diamond, The North Face China, Mad Rock and Dali Bar. He is also the author of multiple climbing guidebooks and has for many years been the major force behind developing the Liming, China area for trad climbing in sandstone cracks. Learn more at his website. Our thanks to Garrett Bradley for contributing photos, which may not be shared or reused without his permission. You can find more of his images of China’s pioneering climbers at his Instagram account: @garrettlbradley 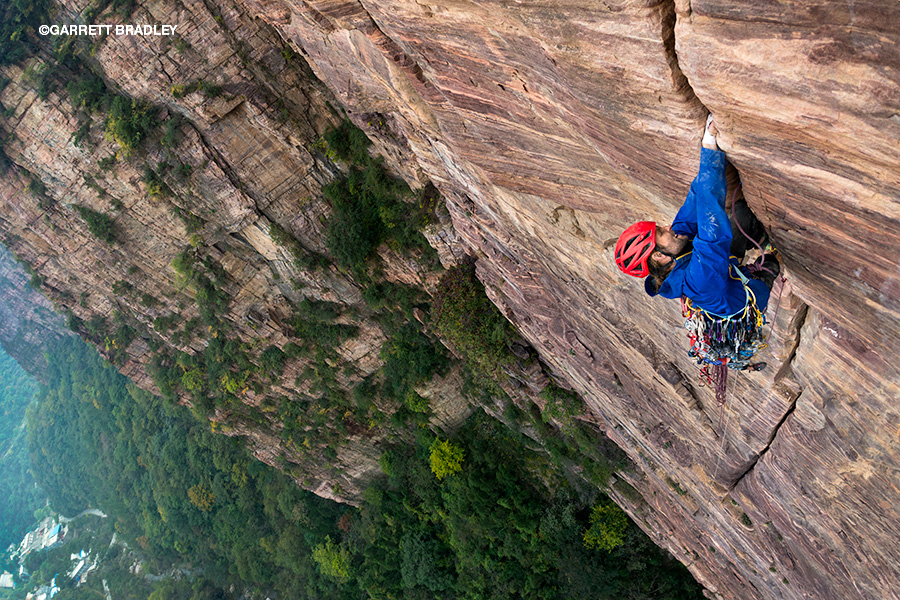 Guoliang, Henan is a place that most people in China as well as outside of China have probably never heard of. Over my last five years in the country whispers of a climbing area with quartzite sandstone walls would come up. Fellow Dali Bar athlete Chris Miller and I decided to follow the trail of voices to confirm the growing hype. What we found was nearly endless walls of quartzite sandstone and the start of what will be a great climbing area in the future. 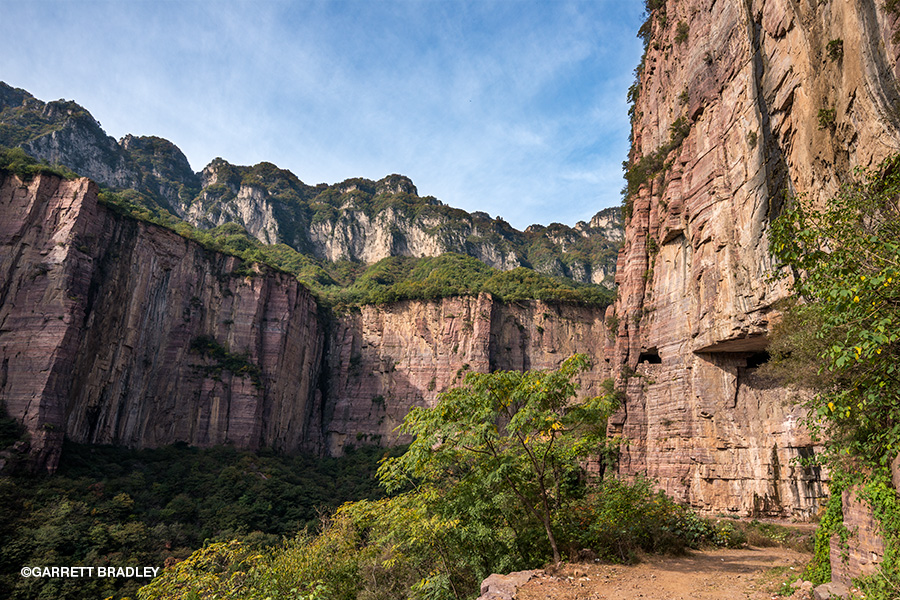 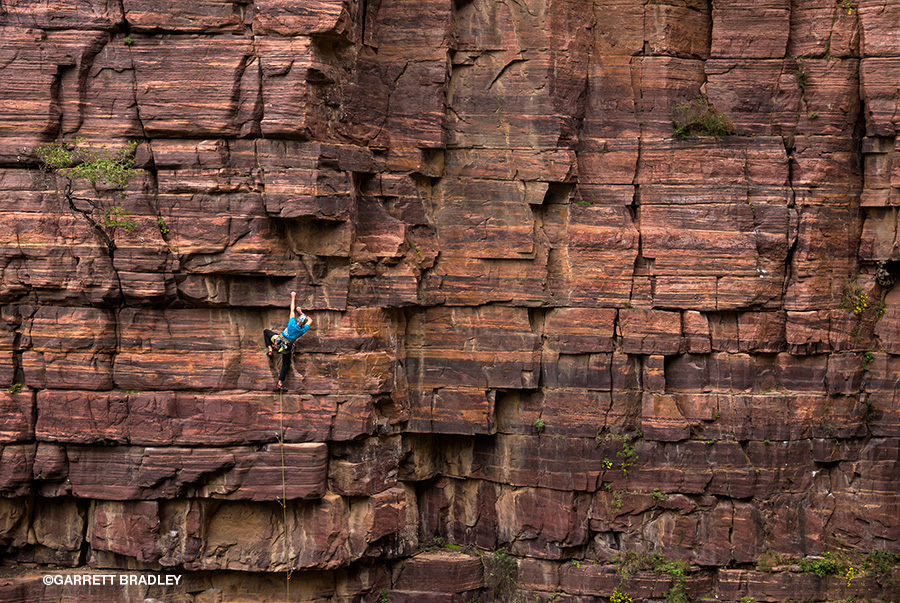 After talking with locals we discovered that climbers have been developing the rock since 2006, primarily as contract climbers paid by the park authority envisioning climbing tourism. With it there has slowly been a local scene building from the surrounding city of Zhengzhou that call Guoliang their local crag. With less than a decade of climbing history, the area already has nearly 200 routes developed.

We immediately went to the established crags and touched the rock. The red hue stone offered  slopers, crimps, and cracks all in a single pitch. My only distaste came from the presence of bolts next to perfect cracks. Contracted route development and park liability for injury and death could explain this “lack of ethic”.

Chris and I noticed a splitter high up on one of the walls decided to pursue it based on its position and beauty.  Hiking up to the base of the route we folded away bushes and branches of vegetation and found a long forgotten crag of sport climbing routes that the locals didn’t even know about. In turned out to the be best established climbing in the area offering hard and crimpy sport routes. 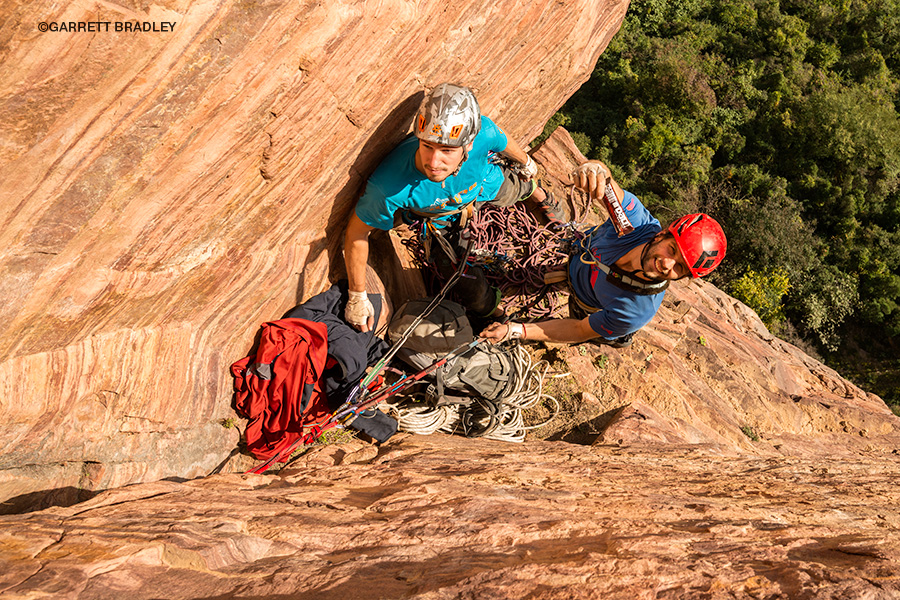 The crag was a nice find but our hearts were set on the potential new route. We identified and climbed a corner system out of the crag and ended below a series of roofs that looked a bit tricky to protect. Pulling out my aid climbing weaponry with a bit of crazy I went up these roofs. With presence of a crag below we questioned whether or not the route had been climbed, I thought for sure no human being had touched the roof pitch as rocks and rubble rained down past Chris as I chiseled out my protection. Aid trickery put us on a ledge and into the main crack feature we saw from the ground. Halfway up the next pitch we found a random bolt which put the thoughts of a new route into question.  Regardless the next pitch was a super nice overhung hand crack and corner that went nicely. 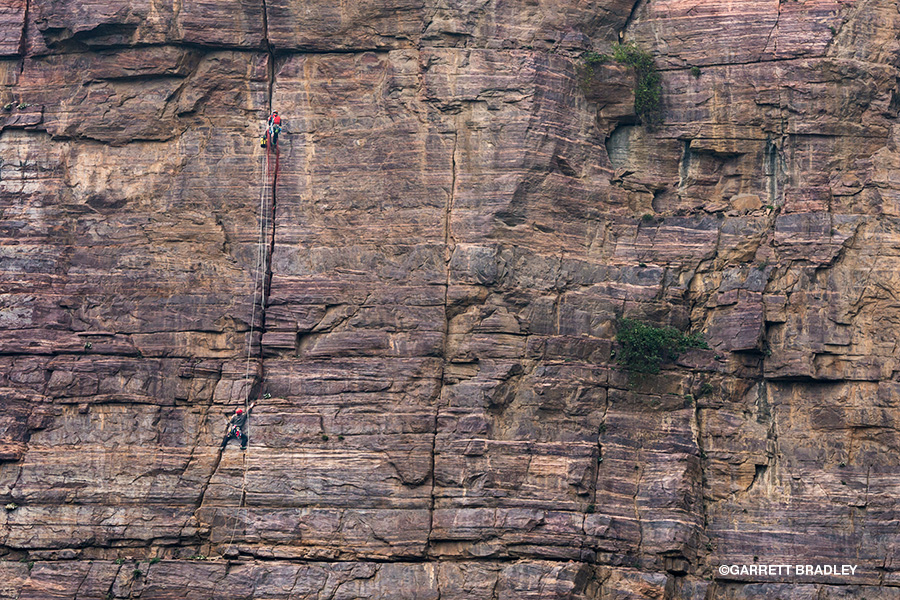 Later on I talked to a few of my Chinese climber friends and found out that the route had been aided in 2007 but not freed. The pitch with falling rock was circumnavigated via two pitches of a sketchy looking traverse pitches. Which explained the “crispy” rock and sketch gear.

Crimpy sport routes, jamming cracks, and roof climbing are the main draw to Guoliang. Most of the established routes reach into the 5.12 range of difficulty, but there is potential for a wide range into 5.14. With more love, organization, and traffic Guoliang could become another destination for climbers in China. 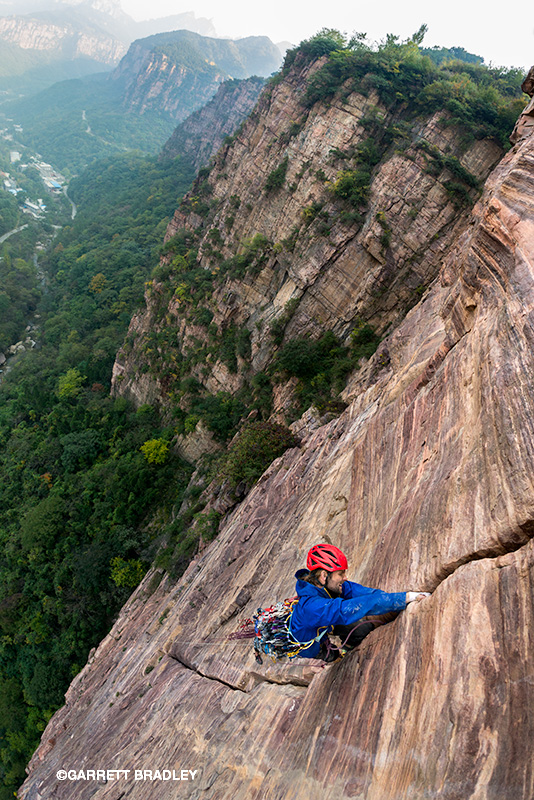