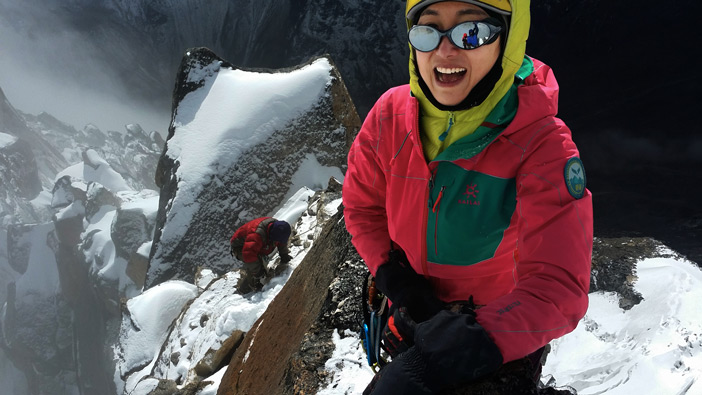 For Simone Liu, this year’s Golden Rhino China outdoor sports awards were a new high mark in her climbing career. For some time Kailas-sponsored Liu has been among China’s strongest and most charismatic female rock climbers. Now as part of the expedition that captured the Golden Rhino award for top climbing accomplishment of 2014 for the first ascent of Crown Peak in Sichuan province, she is also making her mark in the climbing community.

This technically challenging climb was one of her first experiences with mixed alpine climbing and team leader Jon Otto of Leadclimb mountaineering school praised how quickly and easily she has begun the transition from a pure rock climber to a full-fledged mountaineer.

Dali Bar founder Colin Flahive was recently lucky enough to catch up with Liu in his hometown of Boulder, Colorado, where Liu currently resides. Read on to learn more about Liu’s unique journey as part of a trailblazing generation of female Chinese climbers and her plans for the future: 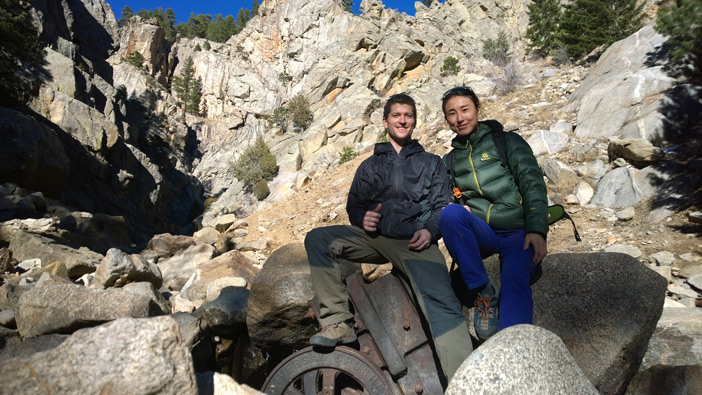 How did you first start developing an interest in outdoor sports and climbing?

When I was little, as soon as school let out, I would immediately run to a park across from my house. There I could catch fish in a little pond and climb on the decorative rocks formations you usually find in Chinese parks. That was my earliest form of outdoor sports. Shanghai didn’t exactly have real nature, but most of what I can remember from my childhood is centered around my time spent in gardens and parks.

Later I saw a TV program about mountaineering and was enthralled. The first time I went to a man-made climbing wall I noticed somebody had written on the wall that rock climbing is a branch of mountaineering, so I took up rock climbing! In 2005 I went to Yangshuo and discovered climbing outdoors is a totally different feeling: real rock, blue skies and great scenery.

In recent years, you’ve moved from the climbing gym into the outdoors. You’ve climbed mountains all over the country, including some first ascents in Sichuan. What do you think can be found in the outdoors that can’t be found at the rock gym?

This year my mountaineering mentor Jon Otto led some of younger climbers on a first ascent of Crown Peak in Sichuan. This was my first time mixed climbing (ice and rock). Unlike the climbing gym, the outdoors is volatile. Conditions can go from heaven to hell in the blink of an eye—and that’s not an exaggeration when one is talking about high alpine environments. On the other hand we were the only people up in those valleys and we were totally separated from civilization. Our surroundings have a great impact on us, and in the mountains one can gain a great sense of tranquility.

How do to stay in shape when you can’t get into the mountains?

I remember once I got so exhausted on an tough expedition that I lost the ability to even enjoy my surroundings. That experience prompted me to get serious about training for technique, power and endurance to be able to withstand anything nature throws at me. I designed my training to be able to do it at the climbing gym, but I change it up depending on what’s coming up in my climbing and mountaineering schedule. I also sometimes do work on the fingerboard at home. This means I can do my training whenever and wherever I want. 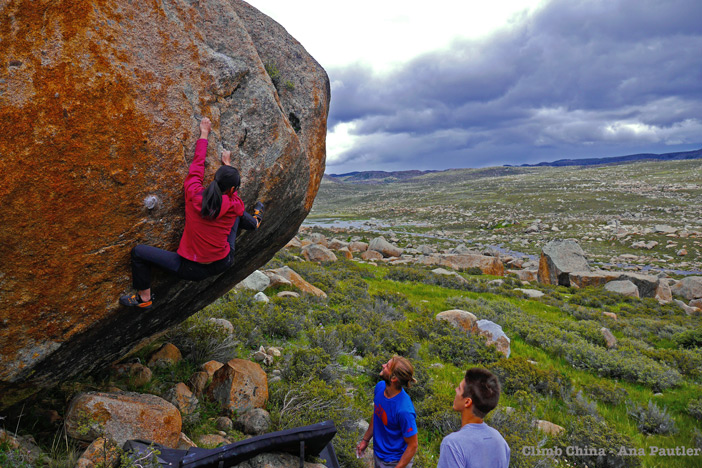 I’ve seen some photos of you on bouldering trips recently. What do you enjoy most about bouldering?

I’ve been bouldering for a few years now. I’ll usually go outdoors somewhere with friends and we work on moves and sequences together. Bouldering routes top out at around 4 meters, so they’re pretty short. Of course there are plenty of easy routes, but ultimately it’s a good opportunity to build power with challenging routes that feature tightly linked and difficult moves. The freedom of bouldering is also nice at time: no ropes, no harness. Just a pair of shoes, a chalk bag and maybe a crash pad to fall onto. It’s also a really effective way to become a better climber through building focus and tackling difficult crux-like sequences. I have a friend who had spent a really long time projecting a sport climbing route and he was still unable to climb it. It was only after he started bouldering that he was able to master the crux moves and send the route.

Over the last year, you’ve been in the mountains of Moab, Utah; Red Rocks, Nevada and Boulder, Colorado. What has been your impression of the outdoor sports community in the US?

I’ve been living in Boulder for a while now. It’s said to be the most outdoor sports-oriented city in the US. People here live really healthy and simple lives. I sense a kind of continuity between people’s inward feelings and outward actions: if people feel like doing something then they immediately take action and do it. For instance, I have some friends who have decided that they want to raise their game in rock climbing. So they created a training program and made very evident progress in a short amount of time. There’s a lot of people like that in Boulder.

If you talk about the development of outdoor sports in the US, I think you’ve got to factor in the involvement of regular families. Especially in Colorado, be it mountain biking, hiking, skiing or whatever, regular people have a sport for every season. These activities really become a part of people’s lives. It’s normal for people to go camping as a form of accommodation when they go traveling and camping areas are very minimal which encourages people to be independent and self-contained. It’s also nice that people follow the rules and keep things tidy for those who come after them.

Can you give us a sneak peek at some of your upcoming adventures? What can we expect to see in the future of Simone Liu? 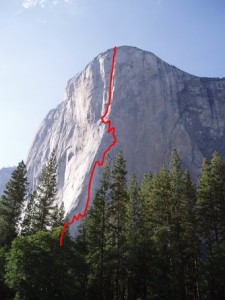 This year I am going to attempt to climb the Nose route up El Capitan in Yosemite in less than 24 hours. It’s a pretty hard route. Every year about 600 to 700 people attempt it and the success route is only about 50%. The goal of doing it within 24 hours is to sweeten the pot a little by further challenging myself. I’ve studied the whole route and gained an understanding of why many teams fail to reach the top and my partners and I have confidence that we can overcome this challenge.

My future after that…I’m going to keep following my heart and keep climbing!